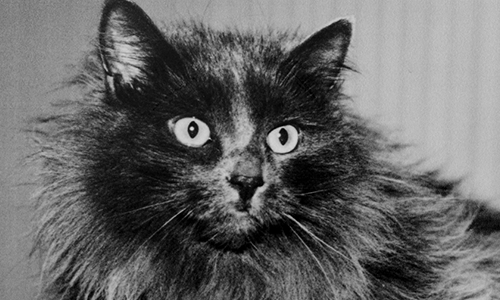 While peacefully sleeping in her home during the early morning hours of June 14, 1998, Guylaine Labonté never imagined that she would lose everything she owned in one day.

At 6:46 a.m., Guylaine’s cat, Étoile de Nuit, began meowing loudly. Thinking nothing of it, Guylaine tried to go back to sleep but the persistent feline was determined to wake its owner. Groggy and sleepy-eyed, Guylaine arose to find a fire raging in her bathroom and smoke swirling in her living room.

The local fire department was quick to get to the scene, but could do little to stop the building from burning to the ground. As she watched her home being completely destroyed, Guylaine pleaded with the fire fighters to help her find Étoile de Nuit. Sensing her distress, an attending police officer approached Guylaine and asked if she could help identify a very frightened cat that had been found close to the building – Étoile de Nuit!

Guylaine lost everything she owned because of the blaze, which was later determined to have been set by two robbers in their attempt to cover their tracks. But as she rebuilds her life, she does so with the help of her faithful and heroic companion, Étoile de Nuit.