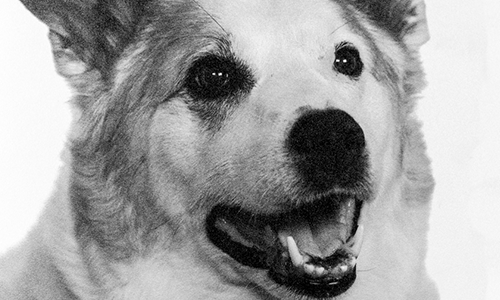 Chance, a nine-year-old Dalmatian/Fox Terrier mix, is a loyal and obedient family dog with an incredibly strong sense of responsibility. At the end of last year, his family found out first-hand just how devoted he is to protecting those he loves.

On a mild day early last December, Veronica Fraser and her seven-year-old son James Delorey were playing in their backyard with Chance. James, an energetic and curious boy, suffered from severe autism and as a result he was unable to communicate through speech. Veronica was watching James and Chance play, when she heard a loud “clunk” come from the direction of the family motor-home, parked on a nearby hill. She turned to suddenly discover that it was starting to roll away. Veronica quickly ran to the motor-home, jumped in to the driver’s seat and put it into park. When she returned, just moments later to where James and Chance were playing, they were nowhere in sight.

The family backyard leads into a densely wooded area and brook. Veronica immediately started searching the area, following several trails. But despite her immediate and urgent search, she could not find James. Panicked, Veronica ran home, alerted her entire family and the police that James was missing. The search was officially on ? this time with police and community assistance; four-wheelers and trucks drove deep into the forest and through the streets of South Bar. When evening came, the police brought in night-vision goggles and helicopters to aid in the search. Veronica, terrified about what had happened to her son, was comforted by the fact that she knew Chance was with him. Chance loved to follow James and she knew that he wouldn’t leave him alone. The search continued long into the night.

By the morning, a snowstorm had hit the region. There was still no sign of James or Chance. James did not have a jacket and had been outside all night. Everyone involved felt the gravity of the situation as each hour passed. Hundreds of people within the community were helping with the search, now in blizzard-like conditions. The one thing keeping Veronica’s hope alive was the fact that Chance had not yet returned. In her heart Veronica believed that this meant that James must still be okay, because Chance would only come home if James couldn’t.

Two days after James’ disappearance, Chance suddenly emerged from the marshy woods. As a result search and rescue teams followed Chance’s footprints in the snow leading them straight to James, who was suffering from severe hypothermia. He was unconscious but, amazingly, still alive. He was rushed to the hospital where medical teams worked tirelessly to stabilize him. Officials were astonished that he made it through the blizzard. They attributed his survival to Chance staying by his side, keeping him warm.

Sadly, James succumbed to the hypothermia and passed away later that day. Both his family and Chance were devastated. Although James is no longer with them today, his family is indebted to Chance for being his guardian angel. Chance not only kept James alive until he could be found, but he is also the reason Veronica was able to say goodbye to her son. Without Chance, James Delorey would never have been reunited with his family.