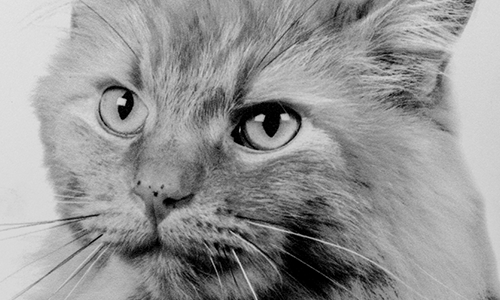 Gepetto joined the Sjogren family eight years ago as a tiny orange kitten. A rambunctious ball of fluff, Gepetto kept the Sjogrens in stitches thanks to his antics with fellow cats Missy, Itty Bitty Kitty and Libby, the family’s Pug. Now fully grown, Gepetto has matured into a quiet, mellow fellow, which is why his actions in early December 2009 caught Phyllis Sjogren’s attention in just the nick of time.

The weather forecast was calling for cold, snow and wind so the Sjogrens loaded up with firewood and prepared for a cozy weekend at home. At three a.m. on Monday morning Phyllis woke from a fitful sleep to a cold house, so she turned the thermostat up, ignoring a growing headache and went back to bed.

Phyllis barely heard her husband leave for work at six o’clock that morning, thanks to the handy set of ear plugs she wears to bed regularly, but nothing could block out what Phyllis calls, “the terrible sequence of yowls” coming from the basement at six thirty a.m.

Other than a random meow or call to go outside, the Sjogren’s cats are a quiet bunch, so the distress in Gepetto’s wailing voice was enough to make Phyllis jump from bed to investigate. As she rose, Phyllis realized the headache from hours before had now escalated to extreme pain, but she was determined to check first on the safety of her cat.

Reaching the kitchen, Phyllis was shocked to find Gepetto making an absolute racket at the top of the basement stairs. Despite an overwhelming feeling of nausea and feeling so dizzy she could barely walk, Phyllis bent down to comfort Gepetto until he quieted down and went down to the basement. Now awake, but ready to crawl back into bed, Phyllis called her husband to ask about her strange symptoms. Alerted by the sequence of events, Martin Sjogren implored his wife to leave the house immediately and call a close friend employed by the gas company for help.

Emergency crews revealed the Sjogren’s home had filled to a level of 70 per cent with carbon monoxide and Phyllis was suffering from stage two carbon monoxide poisoning – stage three is death. Phyllis credits Geppetto’s plaintive cries with saving her life. He knew just when to use his voice – when it was time for him to save his owner.