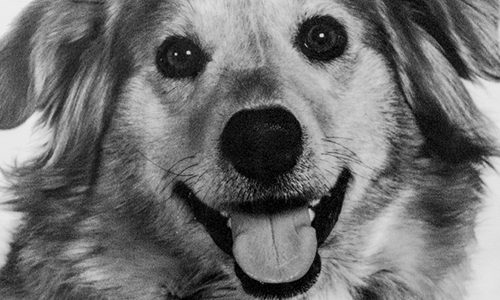 A working dog with a heart of gold, Patty is a five-year-old Border Collie mix who came to live on the Jensen family farm when her previous owner was no longer able to care for her. The Jensen’s had no idea that Patty would thank them for their generosity by saving one of their lives.

On a cool day in May 2009, Patty joined her owner, Kai Jenson, and his son Allan as they prepared to plant their yearly crop. Kai and Allan worked together on the farm equipment, checking hose connections and looking for loose bolts, before setting to work. Allan did one last safety walk to make sure his father and Patty were at a safe distance from the air seeder before hopping into the tractor cab and starting the machine.

Before Allan closed the cab door to drive away, something strange caught his eye. Usually a mild mannered and quiet dog, Patty began frantically jumping and barking furiously at the two meter/ six foot high door. Allan stared down at Patty as she started running in anxious circles beside the tractor; her actions were so uncharacteristic that Allan began to feel something was terribly wrong.

Stopping the tractor, Allan jumped out of the cab and followed Patty as she raced behind the machine to reveal Kai lying crushed behind the 2700 kg/6,000 lb air seeder. In a heart-stopping second Allan pulled his cell phone from his pocket to call 911; he and Patty spent the next 15 minutes crouched by Kai’s side until the ambulance reached the site of the accident.

Shortly after the paramedics arrived, Allan’s sister, Karen Jensen, pulled into the farm for what she thought would be an ordinary family visit. Instead, she found her mother, Allan and Patty standing outside the house with grim looks on their faces. Puzzled, Karen asked what happened and found out the terrible news. Her father had been crushed by their air seeder. Horrified, Karen looked towards the field and saw the medical team working as fast as they could to stabilize Kai. Following what seemed like an eternity, the paramedics were finally able to rush him to the hospital where he began a two-month journey towards recovery.

If you ask the Jensens about the accident today, they’ll attribute Kai’s life to Patty’s intuition. In a scenario where every second counted, Patty didn’t waste a moment getting help. To this day no one, including Kai, knows exactly how the accident happened.

While Kai can no longer farm due to the injuries he sustained during the accident, he’ll call for Patty when he goes outside and they’ll walk the grounds together. Wherever Kai is, it’s never far from his furry best friend with a heart of gold. After all, this furry friend saved his life.