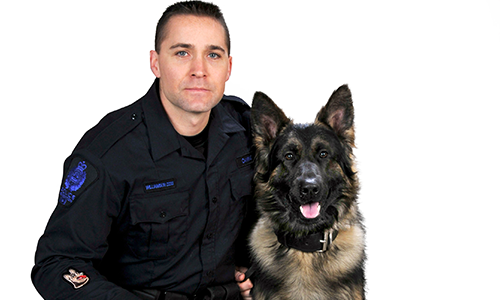 The relationship between a man and his dog is unlike any other. It’s a bond so strong and so special that little compares. This is the kind of bond Constable Matthew Williamson (Matt) had with his partner, Police Service Dog Quanto. Quanto, a five year old German Shepherd Dog, was truly Matt’s “partner in crime.”

It was a dark, early morning in October 2013. At around 5 a.m., Edmonton police officers were dispatched regarding a man with a gun near a convenience store. As a one-man unit drove through the area he noticed a male putting gas into his car. The officer ran the license plate through the system. It came back stolen.

The suspect got back into the stolen vehicle and as he drove away the officer attempted a traffic stop. However, the driver refused to pull over and a vehicle pursuit ensued. During the pursuit, the driver jumped several cement medians, ran multiple red lights and reached speeds in excess of 120 km/hr.

Matt and Quanto were only about a mile away in their car when the pursuit started. Matt strayed from the pack of police cars following the suspect in an effort to quickly establish a perimeter.

In fact, Matt and other police officers could see that the suspect was bracing himself and clenching his fists – appearing like he was getting ready to fight. Matt deployed Quanto and as he reached the suspect, the man presented his left forearm and proceeded to “hit” Quanto numerous times with his right fist while Quanto was engaged. As Matt got closer, he could see the suspect was holding a knife and was actually stabbing Quanto.

Matt ordered the suspect to drop the knife and at this point Quanto had released his hold and turned towards Matt. By this time other Edmonton police officers had arrived at the scene, and surrounded the suspect to arrest him.

Matt then noticed a large amount of blood streaming from the front of Quanto’s chest. Seeing that Quanto was severely injured, Matt immediately grabbed him by his harness and began running back to his vehicle. Matt and Quanto had only begun to run when Quanto’s legs gave out and he collapsed.

Matt had to lift and carry Quanto the remaining distance back to his police vehicle. As Quanto was put in the back of the vehicle, his body was completely limp.

Matt drove to the nearest trauma center where veterinarians worked on Quanto but they were unable to revive him. It was later determined Quanto had three major stab wounds to his body – including a fatal one that punctured his aorta.

There is no question that Quanto went above and beyond his call of duty as a police service animal that day. Quanto made the ultimate sacrifice by giving his life to protect his team and the citizens of Edmonton, and for this incredible act of heroism, he will always be remembered.