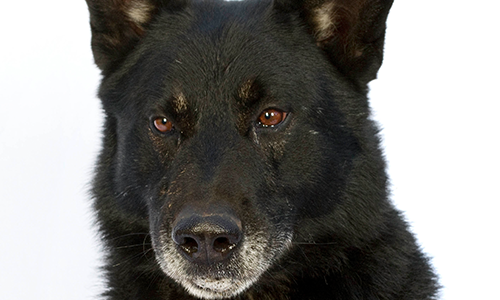 Sako is an energetic four-year-old King Shepherd who, as a puppy, joined a big family within the close-knit community of Kanaka Bar, British Columbia. Sako grew up surrounded by friends and family members, and as a result, developed a very strong, protective instinct over the years. It would be this instinct that would push Sako to go above and beyond to protect the life of a loved one on June 10, 2014 in his most desperate time of need.

It was a sunny day in June, when 16-year-old Joseph Phillips-Garcia set out on a family road trip an hour out of town with his aunt, cousin, friend and Sako. They would eventually meet up with other family members near Botanie Lake to go fishing and wild potato picking – a very popular cultural activity in the community. Later that evening, on the group’s journey home, their vehicle suddenly lost control on the road, rolling down a steep embankment of more than 100 metres into the woods.

During the devastating fall, Joseph and Sako were thrown from the vehicle. Tragically, they were the only survivors. Joseph, stranded deep down the embankment, suffered a broken femur and collar bone which left him severely injured and unable to move. He remained in the woods – in and out of consciousness, cold, in pain and without food, as well as vulnerable to attacks by wild, predatory animals – for two days.

However, Joseph was not alone. Miraculously, Sako also survived the accident, and being the caring and protective dog that he is, stayed by Joseph’s side, keeping watch and helping him in whatever way he could during their time in the woods. To help keep him warm, Sako lay close to Joseph and helped move wood closer to him so he could make a fire with the lighter he had in his pocket. To keep him hydrated, Sako helped Joseph to drag himself closer to a nearby creek so he could drink some water. To keep him safe, Sako ran into the bushes and surrounding area to fend off coyotes and other predatory animals who were circling the crash site, howling and posing an imminent threat to Joseph.

More than 40 hours later, on June 12, 2014, Joseph was finally located. His cousin, who was out searching for Joseph, spotted him. The RCMP, along with search and rescue crews, were immediately called to the scene. Because of the steepness of the embankment, it took about three hours for crews to reach and safely remove Joseph from the site of the accident and rush him to a hospital, where he underwent multiple surgeries and months of recuperation from his injuries.

It has been nearly a year since this terrible and tragic accident. Joseph is still recovering both physically and emotionally. There is no question for Joseph of the crucial role Sako played in his ability to survive this painful, frightening and life-threatening experience. Not only did Sako’s protective and heroic actions help keep Joseph safe, it was also Sako’s devotion and unyielding companionship that gave him the hope and the courage to hold on until he was found.