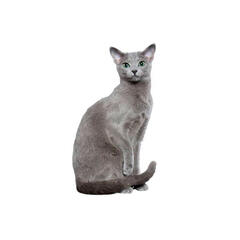 The Russian Blue is gentle, quiet and even shy around strangers, but she’s affectionate and loyal toward her people. She’ll follow you around and even ride on your shoulder.

She can entertain herself while home alone but loves to play games of fetch with her people. You may also find her jumping and climbing so she can observe everything from above. If you need an alarm clock, this feline relies on routine and will wake you each morning so she doesn’t miss breakfast. She’s tolerant of children and other cat-friendly pets.

Although Russian Blues have gray coats, in cat shows, this color is referred to as blue. The tips of their fur are silver, so her coat glistens in the light.

The Russian Blue has a unique body type. It’s known as “semi-foreign” and is in between the short and compact-bodied breeds like the Persian and angular breeds like the Siamese. She has a medium-sized, wedge-shaped head with large, pointed ears. Her round, wide-set green eyes are stunning, and her long neck and firm, muscular body is covered with a short, thick and plush double coat.

The precise origins of the breed are unknown, but many believe these cats hail from Russia based on their warm double coat. The Russian Blue likely arrived in England and Europe in the mid-1800s on boats from the continent. They were first shown in 1875 in London, competing with other blue cats. In 1912, however, they were given their own competition class.

After World War II, English and Scandinavian breeders worked to revive the breed through outcrossing with similar breeds like blue British Shorthairs and blue point Siamese. North American breeders later imported Russian Blues of both varieties to achieve the best features of each.

Unlike other breeds, Russian Blues do not shed constantly. Simply comb her coat a couple times a week to keep it soft and shiny.

Russian Blues are a healthy breed, though their hearty appetite could lead to obesity if left unchecked.

Although they’re a relatively healthy breed, Russian Blue Cats are at risk of obesity due to their love of food. In addition to providing them with plenty of exercise through play time, consider selecting a weight-management formula for your kitty’s food. A cat food like Purina ONE Healthy Metabolism or Pro Plan Focus Weight Management Chicken & Rice Formula will help your Russian Blue maintain a healthy weight throughout her life.

Your Russian Blue kitten has specific nutritional needs during her first year of life. To ensure these needs are met, choose a complete and balanced kitten food such as Purina Kitten Chow Nurture, Purina ONE Healthy Kitten or Pro Plan Focus Kitten Chicken & Rice Formula, which will provide her with all the nutrients essential to her growth and development.

To explore other products for your Russian Blue, see our Product Selector.

FIND A RUSSIAN BLUE CAT IN YOUR AREA 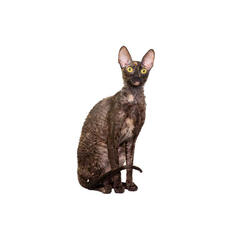 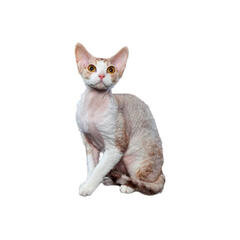 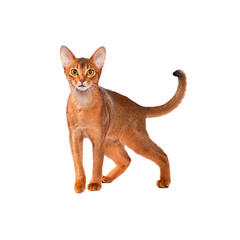 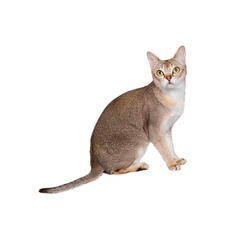