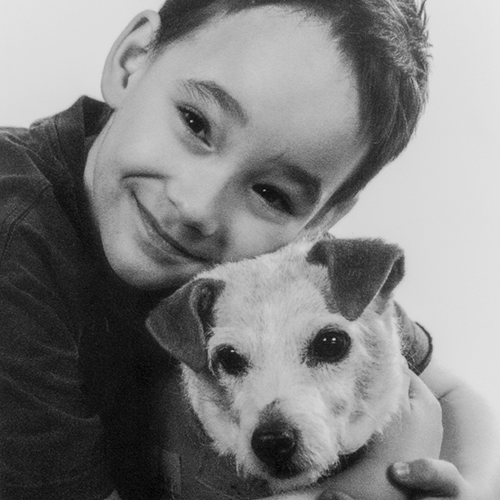 Bingo is an intelligent, ten-year-old Jack Russell Terrier with a truly keen set of ears. An extraordinarily sharp hearing dog, she was brought home by Mandi and Dwayne Hein to help care for their son, Cole.

Eight-year-old Cole suffers from a life-threatening and undiagnosed condition that causes him to retch and stop breathing with little to no warning. As he was growing up, Mandi and Dwayne took Cole from specialist to specialist, trying desperately to figure out what illness was taking hold of their son. Because of the severity of his symptoms, Cole has to be under constant supervision – 24-hours-a-day. The Heins used everything from monitors to nurse aids. Cole was also constantly in the hospital for scans and surgeries both to help diagnose his illness and to treat its effects on his body. Not only did this continual medical supervision put a toll on the family, it also didn’t allow Cole to ever be left alone – or lead a normal life. In addition, Dwayne, a military officer, was often away from home – most recently in Afghanistan – making it even more challenging for Mandi to care for Cole’s mysterious condition along with the rest of the family on her own.

After years of searching for a diagnosis and cure and finding nothing, Mandi decided that it was time to take charge and come up with a way to accept and manage with Cole’s mysterious condition at home. She decided to enlist the help of a hearing dog who would be able to alert them to Cole’s retching. After an extensive search and with the help of the National Service Dogs, she found Bingo.

Bingo was specifically trained to bark whenever she heard Cole retch, alerting Cole’s family to the fact that Cole may have stopped breathing – an amazing feat as most hearing dogs “tap” their deaf owners. With this unique skill set, Bingo proved herself to be Cole’s saviour time and time again, barking and alerting Mandi – often just in time to either get help or administer artificial respiration. In fact, according to Mandi, within the first six months of receiving Bingo, she had already saved Cole’s life three times. Today, Mandi cannot even begin to count how many times Bingo has rescued Cole from near-death.

Bingo’s acute sense of hearing, dependability and loyalty completely opened up a world of independence for Cole and his family. She gave them a sense of peace (and a little extra sleep!) knowing that Bingo was always watching over Cole, ready to react should his condition put him in any danger.

Cole and Bingo’s story is one that sends a message of hope. Mandi and Dwayne often refer to Cole as a “miracle baby”, who was never supposed to survive. To them, Bingo is “the answer to their prayers” and the reason Cole was able to grow up to be the boy he is today.