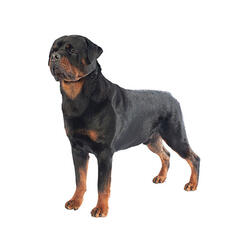 The Rottweiler is a muscular, courageous and devoted dog breed. Descended from Roman drover dogs, they were originally used to move and guide herds of the Roman army. Today, “Rotties” are still used as herding dogs, but are also trusted service dogs, guard dogs and companions.

Temperament of the Rottweiler

Known for his calm confidence, strength and good-natured disposition, the Rottweiler strikes an unlikely balance between world-class guardian and goofy playmate. Courageous but not overly aggressive, this hard-working dog benefits from early training and socialization to positively direct its territorial instincts.

Rottweilers are hardworking, strong and loyal “people dogs.” Despite their imposing manner, they are often described as goofballs by their enthusiasts. Though silly and affectionate with those closest to them, they are also territorial. Early socialization and training is essential in order to raise a well-mannered Rottie.

Rottweilers are also extremely intelligent, highly trainable and thrive when working alongside their human partners. This is why they make exceptional therapy, search-and-rescue and police dogs.

How Long Does a Rottweiler Live?

The Rottweiler will typically live between 9 to 10 years.

According to the American Kennel Club (AKC) standards, Rottweilers are always black with markings ranging from rust to mahogany.

The Rottweiler is a moderate shedder. Typically, Rottweilers shed heavily twice a year, once in the spring and again in the fall. They shed moderately throughout the rest of the year and require weekly brushing to remove loose fur.

As with all breeds, cancer is a possibility. The American Rottweiler Club advises health evaluations on the hips, elbows, heart and eyes, as hip dysplasia and certain hip and eye diseases are possible with Rottweilers.

When choosing the best dog food for your Rottweiler, keep his unique breed traits in mind. Since Rottweilers are considered large dogs, a large breed dog food is a smart way to help maintain his ideal body condition.

As with puppies of all breeds, Rottweiler puppies have specific nutritional needs. Because they are large dogs, they may require puppy food until they reach 18 months to 2 years of age. Look for a puppy food formula containing DHA to nourish brain and vision development and antioxidants to support their developing immune system during these formative years.

The Rottweiler is descended from mastiffs of the Roman Army. One of the oldest working breeds; they were originally bred to herd cattle while the army was on the move.

After the Roman Empire’s collapse, these dogs became guardians for traveling butchers who settled in the cattle town of Rottweil where the breed got its name. The full name, “Rottweiler Metzgerhund”, means “Butcher’s Dog of Rottweil.”

In the 1800s, Rottweilers’ popularity as herding dogs waned, as railroad cattle cars took over the transport of livestock. Ever the hard workers, Rottweilers found new roles as police dogs, personal guardians and guide dogs. More recently, Rottweilers were called upon for search-and-rescue work at the sites of the Oklahoma City and World Trade Center attacks.

FIND A ROTTWEILER NEAR YOU

Still Looking for a Rottweiler Near You?
Find a Local Breeder 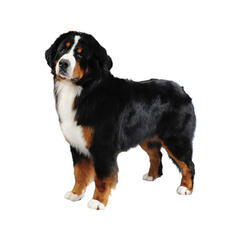 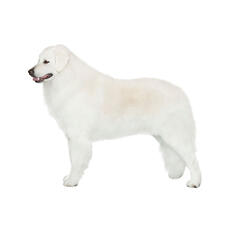 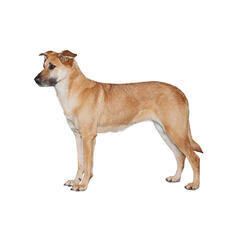 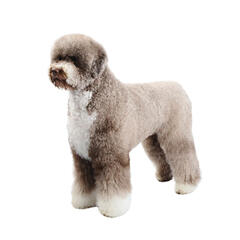