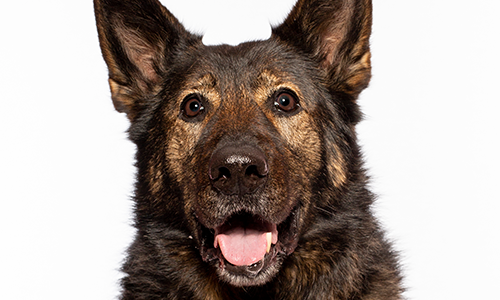 Arik, an eight-year-old German Shepherd’s natural instinct and highly refined sense of hearing and smell were put to the ultimate test, when he came to the rescue of an elderly man who faced a near-fatal situation in Baddeck, Nova Scotia.

On March 3, 2017, Lloyd Stone, a very active 90-year-old, was out cross-country skiing, a regular leisure activity that he enjoyed. Suddenly, he hit some ice and fell on his side – breaking his hip and leaving him in excruciating pain. The intensity of the pain made it impossible for Lloyd to reach the nearby highway and starting to lose hope, he dipped in and out of consciousness.

Three hours later, at 8 p.m., it was getting dark when Lloyd’s neighbour Calvin Kuchta was driving by and recognized his car on the side of the road. He had seen it earlier while going to the gym, and thinking it was a little out of character for Lloyd to be out for so long and so late, Calvin headed home to collect his dog Arik to help him investigate.

Arik was an accomplished former police dog, so Calvin knew he needed Arik to be able to successfully find Lloyd. Unable to use Arik’s leash, Calvin creatively fastened a skipping rope around Arik’s neck to help him track Lloyd’s scent in the woods and returned to the area. As the duo searched deeper into the bush, they finally heard a man’s voice calling for help, triggering Arik into action.

Arik broke his skipping-rope-fashioned leash and bounded into the woods where he found Lloyd lying on the snow-covered ground. Calvin called 911 immediately and Lloyd was taken to a nearby hospital.

Had Arik not been there to help locate him so quickly, Lloyd would have likely suffered from severe hypothermia, and potentially frozen to death.