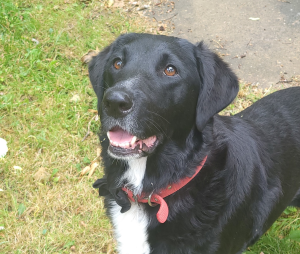 Daisy is a kind and gentle dog with big brown eyes that could melt your soul. She was adopted by Keri and Darin when she was a puppy. She came to them and filled their hearts with love and joy, just when they needed it most—shortly after their beloved dogs, Woofie and Rufus, crossed the rainbow bridge.

Keri was born with a complex congenital heart defect called Blue Baby Syndrome, which is a failing of the right ventricle in the heart. Although she had corrective surgery at the age of 4 years, the surgery itself came with long-term risk, including Arrhythmias, Strokes and Congestive Heart Failure. Keri works very hard at keeping fit and healthy but continues to experience challenges with her health. Her right ventricle is now severely enlarged and is failing, she has been in congestive heart failure since 2013, and is in the process of getting listed for a heart transplant.

One Wednesday afternoon during the pandemic, Keri was working from her office in the basement of their home, responding to some emails. As her office assistant, Daisy was sitting on the couch next to Keri, waiting for her next task or treat. Her husband, Darin, who had wrapped up a midnight shift earlier that day, was fast asleep in their bedroom upstairs.

Suddenly, Keri felt a “popping” in her brain and she collapsed to the floor. Daisy quickly ran to Keri’s side and sat beside her, licking her face, and rousing her. She couldn’t get up. Keri started calling for Darin, but her voice was weak, and she was drifting in and out of consciousness, so her husband couldn’t hear her. Daisy then darted up the stairs & jumped on the bed where Darin was sleeping.

Darin awoke to Daisy licking his arm and found it unusual behaviour for their pup but thought maybe she just needed to go outside for a washroom break. Darin got up expecting to take Daisy outside, but instead she made a beeline for the basement. Now hearing Keri’s cry for help, Darin ran down the stairs to the basement behind Daisy, and found her lying on the floor. He immediately called 911.

Keri had suffered from a Right Ischemic Stroke, one of the long-term risks associated with her childhood surgery. Daisy’s swift actions helped Keri get to the hospital for treatment, before the damage was permanent. The doctors were able to completely remove the blood clot that resulted in Keri’s stroke, leaving no residual effects. Keri has thankfully made a full recovery!

For her incredible act of heroism that saved her best friend, we are so honoured to induct Daisy into the Purina Animal Hall of Fame.